These days we hear a lot about amino acids. But many of us probably do not understand how they work or their link to human health. Simply put, amino acids are the secret to eating and living well. Aware of their infinite possibilities, the Ajinomoto Group is vigorously pursuing amino acid research across a wide range of areas. To find out more, we spoke to Chika Morishima, Corporate Executive Officer in charge of Domestic and Overseas Corporate Communications, about the philosophy behind the company’s research activities. Why are amino acids essential to living a healthy life? How does human evolution explain why we can only obtain certain amino acids from food? By understanding the power of amino acids and how they work, we’ll gain a deeper understanding of why eating well is so crucial to our lives. 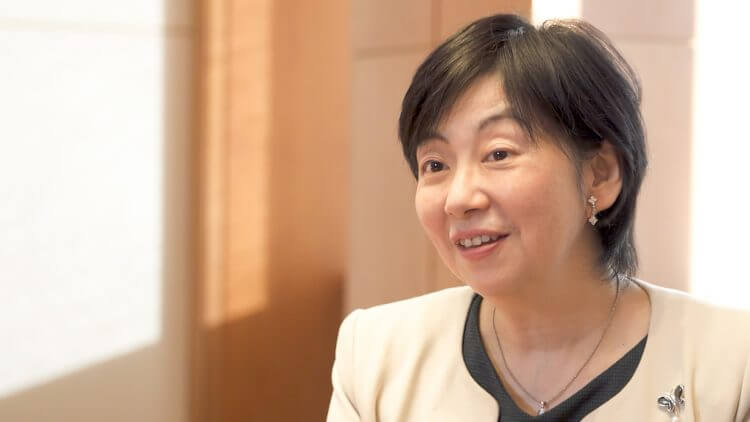 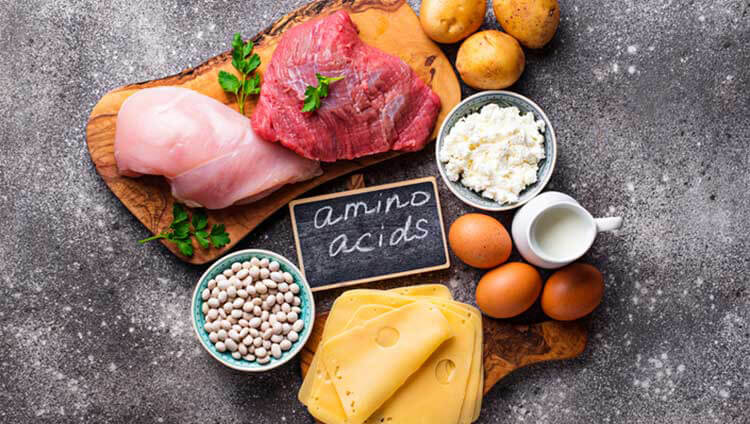 “Did you know that amino acids are a key component of the human body and play an essential role in human nutrition? But before we discuss amino acids, let’s review some basic facts about the human body. You’re probably aware that about 60% of our body is composed of water. Of the remaining 40%, half is protein. That protein is made up of a combination of twenty amino acids.”

“In other words, our muscles, hair, nails and skin, as well as our blood, hormones, and our immune system are all made up of proteins, namely amino acids. Our body could not exist without them. Only twenty amino acids are essential to humans. Of these twenty, eleven can be produced by our body. We must obtain the remaining nine amino acids in the form of food. These are called essential amino acids.”

If we told you that plants can make twenty amino acids, you might wonder why humans can make only eleven. According to Morishima, the reason lies in the process of human evolution.

“Plants cannot move, so it’s imperative they produce all the amino acids they need themselves. But animals are mobile. They can hunt and forage for food. When we learned how to hunt, humans began to obtain protein in the form of meat. Over the course of human evolution, our bodies stopped making nine of the twenty amino acids, opting instead to get them from our food. And since we no longer had to worry about making those nine amino acids ourselves, we could focus instead on developing higher-level functions, such as more evolved brains.”

In the human body alone, amino acids, which it can be said underpin all the body’s vital functions, produce over 100,000 different proteins. In other words, those 100,000 or so proteins are all made up of various combinations of just twenty different amino acids. The blueprint that determines the exact number and arrangement of amino acids in each protein is encoded in our DNA.

“Plants, animals and all living things on earth would not exist without amino acids.”

Our Founding Philosophy and Discovery of Umami

The Ajinomoto Group has been conducting research into amino acids for over 100 years. So how did it all begin?

“Over a century ago, Dr. Kikunae Ikeda of Tokyo Imperial University (now the University of Tokyo) identified an amino acid called glutamic acid as the key component of what he named “umami,” which gives kombu, a type of kelp used in Japan for making tofu hot pot, its distinctive flavor. Thus, AJI-NO-MOTO® umami seasoning was born.”

“Basic research into the functions and properties of amino acids has underpinned our businesses ever since. Throughout our history, we have developed new products based on amino acid research, ranging from seasonings and processed foods to supplements, pharmaceuticals, cosmetics ingredients, and even electronic materials.”

But how did Dr. Kikunae Ikeda become so interested in understanding umami? The answer begins with a research trip he made to Europe.

“There, he was struck by the larger stature and more robust physiques of Europeans relative to Japanese people. Supposing this was due to better nutrition, he resolved to find a way to improve the Japanese diet by encouraging people to eat more nutrient-rich foods such as tofu. After returning to Japan, it occurred to him, while eating tofu hot pot, that the secret of its delicious taste was the kombu broth in which it was cooked. This led to his discovery that the source of the broth’s flavor was glutamic acid, the essential component of umami.”

“It is this spirit that is expressed in our founding philosophy, ‘Eat Well, Live Well.’ which permeates who we are and everything we do.”

The Ajinomoto Group could not have been founded but for the discovery that glutamic acid is the key component of umami. Now scientifically recognized as one of the five basic tastes, along with sweet, sour, salty and bitter, umami has entered the international lexicon.

“Today, we are proud to say that we are carrying on Dr. Ikeda’s founding philosophy of improving people’s diets by providing tastier, more nutritious meals—a contribution to the world that Japan can be proud of.”

The Link Between Eating and Amino Acid

The Ajinomoto Group has spent decades researching food and amino acids. But to the general public, the connection between the two may not be entirely clear. Below, Morishima explains the three benefits of eating to show how it is closely linked to amino acids.

“Eating has three main benefits: nutrition, taste, and health. Nutrition provides the building blocks that the human body needs. Taste relates to flavor and texture, which make eating pleasurable. And health is about maintaining our physical well-being.”

Amino acids are a fundamental component of the human body and play a crucial role in all three of these benefits. But how exactly? 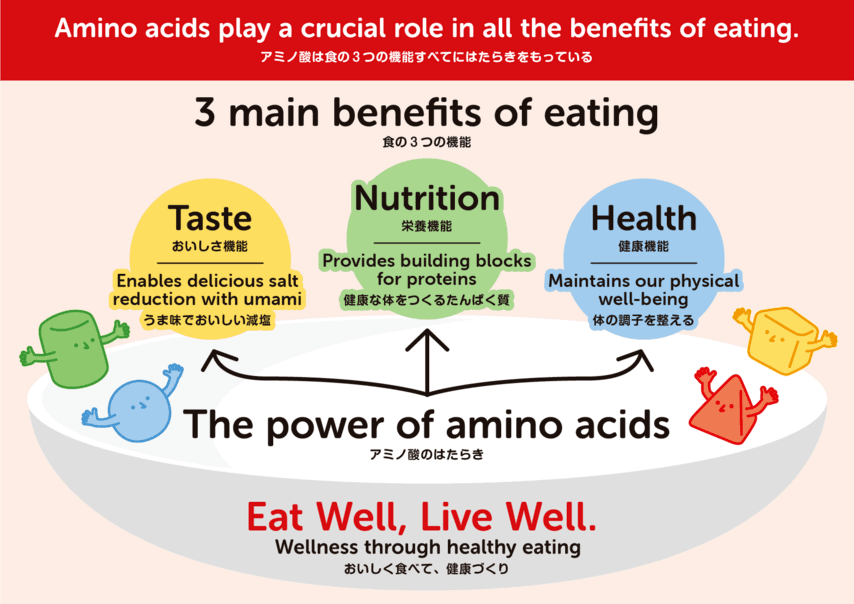 “Let’s begin with the nutritional benefit of food. Protein, which is linked to amino acids, is one of three so-called macronutrients. Children must get enough protein to ensure proper growth. A lack of essential nutrients adversely affects childhood growth. The same is true for older people, who need to eat more protein because muscle mass decreases as we age.”

“Proteins and amino acids are also important for athletes because intense training can damage muscles, causing muscle pain. Muscle proteins are broken down and used for energy, so amino acid intake is essential for repairing muscles when they become deficient in proteins. Thus, amino acids play a vital role in the nutritional benefit of food in a wide variety of ways related to growth, aging, and physical activity.”

“Next is the taste benefit. This refers to the sensory qualities that determine our enjoyment of food, such as taste, smell, and texture. A nutritionally balanced diet is important, but it’s difficult to maintain unless it’s pleasing to the palate. In this sense, eating cannot be separated from taste. The amino acid called glutamic acid is a key component of umami, which makes foods taste good. With excessive salt intake becoming a worldwide health issue in recent years, salt reduction is widely touted as essential to a healthy life. “

“In Dietary Reference Intakes for Japanese People (2020 edition), Japan’s Ministry of Health, Labour and Welfare lowered its recommended maximum dietary intake of salt by 0.5 g, to 7.5 g per day for men and 6.5 g per day for women. In reality, however, the current daily intake exceeds 10 g for men and 9 g for women. In general, reducing salt diminishes flavor and hence our enjoyment of food. Umami can enhance the flavor of low-salt foods. Thus, through the good use of umami flavor components such as glutamic acid, we can create truly delicious, low-salt foods.”

Every day, the proteins that make up the human body are synthesized and decomposed, over and over. For this reason, it is extremely important to consume amino acids, the building blocks of proteins, in our daily diet. But in addition to the benefits of nutrition and taste, says Morishima, amino acids also have the benefit of maintaining physical health.

“The regulation of bodily functions is key to living a healthy life. When certain amino acids are lacking, or out of balance, those functions cease working properly. The amino acid glycine, for example, improves sleep quality. A wide range of amino acids, such as those affecting our immune system and cognitive functions, work to maintain the body’s normal state, or homeostasis. We believe that using amino acids well, and introducing them into our diet, can provide solutions to a variety of food-related challenges, such as excessive salt intake, nutritional imbalance, and nutritional deficiencies.”

Morishima has a passion for amino acids. From the time she was involved in the development of Glyna®, a sleep aid supplement containing glycine, she has felt strongly that the food business and the health business, which on the face of it seemed to be two separate things, were actually connected.

“After working in seasoning and processed food development, I moved to our amino acid supplements mail order business. That was when I came both to understand that amino acids are the most fundamental component of the human body, and to appreciate the potential they have to bring happiness to people’s lives. When I reflected on how our food business offers people the ability to eat delicious, nutritionally balanced meals every day, and our health business provides supplements for when they cannot, I realized that the two should be more closely connected.”

Morishima says that underpinning these businesses is the Ajinomoto Group’s history of amino acid research that addresses issues related to food and human health. Today, even while people around the world are becoming more health conscious than ever, changes in lifestyles and eating habits are raising new challenges surrounding health and nutrition. The Ajinomoto Group has pursued wellness since our founding. Through amino acid research, we are now developing products that offer solutions to these very challenges. We feel this core competency is both vital and truly unique.

How can amino acid research address the reduction in bodily function that occurs as we age?

“Cancer and lifestyle-related diseases are among the health risks associated with this reduction. We developed techniques, based on amino acid concentrations in the blood, both for screening for cancer and evaluating one’s likelihood of developing lifestyle-related diseases in the future. We are also pursuing research into preventing dementia and have discovered that the balance of certain amino acids is related to cognitive function.”

The Ajinomoto Group has announced a goal, by 2030, to co-create greater wellness for people worldwide by unlocking the power of amino acids to solve the nutrition- and health-related challenges associated with diet and aging. We asked Morishima for her thoughts on this.

“Research into amino acids, the most basic and fundamental component of all living things, is both our unique approach to business and a very strong core competency. We have come just a small way in elucidating the function of amino acids and will continue to pursue their huge potential. I want to do my best to help people eat well, live well and feel happy every day.”

As the “source of life,” amino acids are deeply connected to our daily lives. Scientists now believe that amino acids were created shortly