Amino acids, in addition to their vital role in muscle building, brain activities, dietary supplements, significantly contributes to enhance the flavor of your food. Amino acids Glutamate and Aspartate, are the flavor enhancers that are at work to make your food more delicious and serve your taste buds.

Why do Ripe Tomatoes Taste Better?

*Without glutamate, tomatoes would taste more like weak apple juice or a sour apricot.

Tomatoes ripen and turn red when they receive plenty of sunlight. Their amino acid content also increases as they ripen, turning them sweeter. The amino acids glutamate and aspartate are responsible for the taste of tomatoes, and their ratio is crucial. When glutamate and aspartate are present in a 4:1 ratio, tomatoes have the most tomato-like taste. In short, riper tomatoes are sweeter and have a higher amino acid content so they taste more delicious. 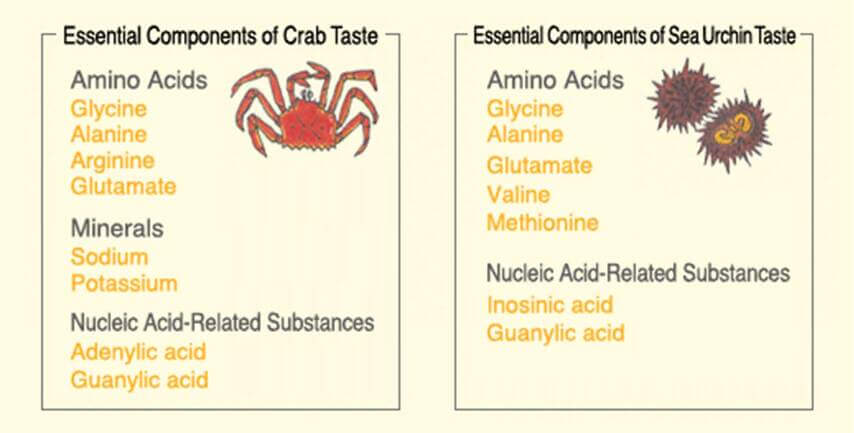 Arginine is a bitter amino acid that brings out the unique taste of seafood.Here is a surprising fact. The taste of crab comes from just a few amino acids working together with nucleic acids and minerals, as shown above. The distinctive taste of sea urchin comes from a set of amino acids that includes bitter-tasting methionine and valine.Sea urchin taste can be reproduced in the lab by combining the five amino acids above in the same ratio found in actual sea urchins. When methionine is omitted, the taste becomes much like shrimp or crab.

Breakdown of proteins increases the amino acid content for more delicious taste.When lions catch their prey in the wild, they first eat the pancreas, small intestines, and liver. These organs are richer in amino acids than muscle and so they taste better. Two or three days later after the lions have left their prey, hyenas and other animals move in to eat the muscle. By that time, the muscle proteins have started to break down into amino acids and nucleic acids, making the meat taste much better. Similarly, sashimi (raw fish) also tastes better after a certain amount of time has passed rather than immediately after the fish is caught. The amino acids and nucleotides in the flesh become abundant about 12 to 24 hours after capture.

Where does the Complex and Delicious Taste of Fermented Foods Come From?

Since ancient times, mankind has found ways to grow, harvest, and preserve foods. Now, instead of simply preserving food, we have developed food cultures that involve the preparation and processing of foods to make them taste more delicious.

Fermentation is one of the techniques that we have learned to make food more delicious. Proteins by themselves do not have much taste. However, if we ferment foods such as soy, fish, and milk, the proteins are digested and become amino acids, which produce various tastes. Because fermented foods are packed with amino acids, they are rich in flavor — and they are also easily preserved.

Amino Acids Work Together for Different Tastes!
Each amino acid has a unique taste. How a food tastes depends largely on what amino acids it contains. When we study the content of foods, it becomes clear that the types and amount of amino acids have a strong effect on the taste.

Amino Acids Work Together to Produce the Taste of Foods!